Minimum Bidding increments and the logic with Auto Bids

Written by Savery Bakker
Updated over a week ago

When we set up an item in an auction we have the option to set the following information.

Minimum/Starting Bid - This is just where the item will start at.

Minimum Bidding Increment - Often we choose an amount befitting of the item. Higher end items might have larger minimum increments. The smallest bid increment available is $1.

So your bid history won't necessarily fall into multiples of your increments especially if someone bids above your minimum increment but not by the increment amount.

It could end up looking like this. And you're wondering why its not following the increments?? And how was someone able to bid only $3 more than the previous bid?? 🤔 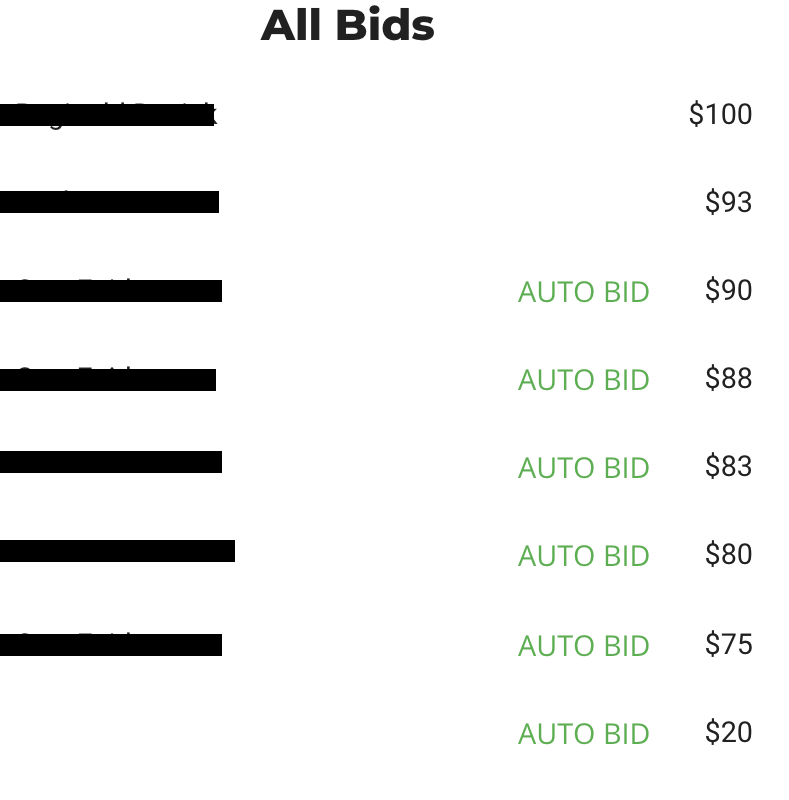 You have an item that has a minimum bid of $20 with $5 increments.

Bill comes decides to set an auto bid at $50 more so his bid is now set for auto bid until $77. However his post will be for $32 ($5 more than the previous bid)

Chad decides to set his auto bid at $80

Bill and Chad will have a quick bid off where it posts their increments and it will max Bill's bid out at $77 (which was $5 or more) and then max Chad out at $80 (which at the time of auto bid was also $5 or more).

Now Doug can come along and outbid Chad at any number of his choosing $85 and up.

This is set up in this fashion so that if the winner's bid has a payment issues and you have to go to the next highest bidder you get the full amount that the bidder was willing to bid and not $2 less because we were following the increments.

What if there is a TIE?

If you have a bidder who has auto bid $20 and another bidder bids $20 our system will automatically set the auto bid as the winner as they bid the $20 first when they set their auto bid amount.

Did this answer your question?